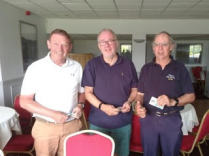 ABERDARE BECKONED THE KILGETTY GOLF SOCIETY
After a week’s postponement to avoid very unfavourable weather, conflicting commitments meant that only 11 Kilgetty Golf Society
members made the trip to Aderdare Golf Club on Wednesday 15 May; happily as well as delightful weather, they enjoyed a warm welcome and good tucker for an excellent day out, playing a delightful parkland course nearly 100 years old, blessed with mature oak trees splendidly overlooking the Cynon Valley. We will be back, hopefully in greater numbers, sooner rather than later.
Wynne Andy Capp Richards, John Hamster Hammond and Bob Dixie Forrest out first, set the pace quite literally, managing a more than creditable 96 points to easily scoop the team prize with Hamster and Dixie coming second and third overall winners and Dixie bagging longest drive to boot. Barry Nippy Neale and Barry Biryani Wood went out next, both scoring well with Nippy scooping first prize after playing two under par with no blobs on his card; their chance of winning the team prize was however scuppered by the third member of their team, Allan Snuff Gawith, who came closer than he might have wished to letting serial wooden spoon winner John Pahmina Perrott off the hook; instead Pashmina dragged his playing partner Peter Peroni Hughes down to last team despite Peroni bagging the nearest the pin award. Finally Graham Victor Longster, Roger Analyst Handcock and Mark Woody Wood played soundly in bringing up the
rear with Analyst’s 30 Stableford points winning the 20+ handicap award.
All in all, a splendid day.