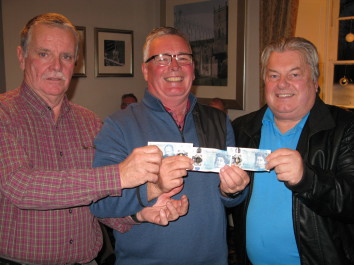 John’s miracle at the Cathedral City

Eighteen Kilgetty Society members hung on every word of last Tuesday night’s weather forecast for the Wednesday, and every word uttered by Derek Brockway and his ilk spelt heavy RAIN. So it therefore naturally followed that we had a pleasant dry winter’s day at St. Davids Golf Course! Why do we bother watching these blessed forecasts?

St Davids GC is set in a divine location overlooking Whitesand Bay with Skomer Island in the distance. And thus it proved to be an inspiration for John Dynamo Richards who, with 36 points, transcended us mere mortals by smighting the flock of other golfers in his path. With his trusty apostles Dave Smiler Green and Tom Tiger Woods, they graciously swept to the team prize ahead of others who laboured in vain. Among the lost souls were Nigel Scissors Taylor, Barry Nippy Neale, and Roger Analyst Handcock, albeit The Analyst benefited from some divine intervention by coming in 3rd with 35 points. Next, Ian Greenball Gregson, who was playing in his own parish, joined Rob Builder Nixon and Steve Eleanor Rigby. Whilst local knowledge didn’t assist Greenball, The Builder managed to garner 35 points to be placed 2nd –a confirmation of his recent ascent to the top table. Next to sacrifice themselves on this little piece of heaven on earth were Steve Gizmo Jones, Keith Director Leverton, and Peter Peroni Hughes fresh from his role as a good Samaritan to his wife.   Praying for a miracle were Mike Slippery Skidmore, Bob Dixie Forrest, and Kevin Dyer Straits, a new believer in the Society. Unfortunately their prayers were not heard. Neither were those of the last group Kelvin Curtains Boughey, Allan Snuff Gawith, and Martin FCUK Davies who were also cast asunder, Curtains once again clutching a wooden carving in the likeness of a spoon for his efforts.

As the first drops of rain fell from the heavens there was a mass exodus to the Grove Hotel in St.Davids where excellent sustenance was to be had. Gizmo presented the accolades including Nearest the Pin (Snuff), Longest Drive (The Builder), 20+ Handicap (Smiler), and Team ( Smiler, Dynamo and Tiger).   All in all, a great day. Thanks to all who risked the heavens opening, and may we be blessed with equally benign conditions at Trefloyne..