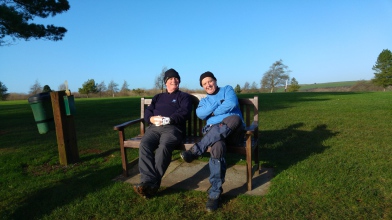 Twenty Kilgetty Society players were delighted to welcome the sun when our January meeting was held at Trefloyne Golf Club the week before last. Play was still difficult however as those who wintered overseas and back for Xmas will quickly testify.

First out off the 1st Tee were Keith Director Leverton, Rob The Builder Nixon, and Wynne Andy Capp Richards. Despite a finger broken in two places (he’s a tough lad) The Builder managed to outscore the other two, and between them they posted a reasonable target score of 73 points. Following were Mike Slippery Skidmore, Kevin Dyer Straits, and Nigel Scissors Taylor - none of whom could cope with the course (55 points) but had a good laugh as they went round. Scissors did redeem his round with an excellent shot on the 12th which won him the Nearest the Pin prize. Next Steve Gizmo Jones, Allan Snuff Gawith, and John Dynamo Richards battled away to a new lead of 77 points. Dynamo however needed a recharge after his Xmas excesses as he petered out to a poor score by his standards, but he was no way near the wooden spoon. Last off this Tee were Barry Nippy Neale, Graham Victor Longster (who did well to beat Chalky for the Longest Drive on the 17th), and new member John Hamster Hammond. Hamster played well for his first outing with the Society, and with a good score from Nippy who came 2nd with 31 , the team shot (stumbled) into the lead with 79 points.

Would this be beaten by those fourballs who had started on the 10th Tee? Darrell Chalky Willington, Martin FCUK Davies, Tom Tiger Woods, and Kelvin Curtains Boughey were first off. Despite valiant efforts by the first three, Curtains performance meant it was curtains for them as they only averaged 63 points. Curtains duly won the Wooden Spoon although he was closely pushed by John Javelin James in the last group out. His compatriots Dave Smiler Green, Andy Popeye Bevans, and Roger Analyst Handcock did somewhat better to raise their average to 58 which considering Smiler came third with 31 points and The Analyst won with 32 points, just about sums up Javelin’s game! Better luck next time.

Back in front of the roaring log fire in the clubhouse, a delicious meal was enjoyed by the players, who were joined by other members who had been unable to play that day. Prizes were awarded to the above winners and also for two 2’s - by The Analyst on his way to 1st place and by FCUK on his way to the bar. Gizmo won the 20+ handicap prize and the day ended with Curtains requesting a cupboard for his collection of spoons.