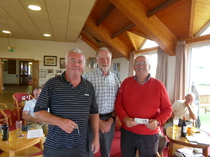 Twenty one keen stalwarts arrived from a sunny Pembrokeshire at Carmarthen Golf Club where dark clouds threatened rain. However it was a brief shower and later the sun came out.

Considering the ideal conditions, scoring was one of the worst in the history of the Society! Only three reached 30 or more points and six did not make 20! In the first group only Gizmo had a reasonable round of 29pts, his partners had a combined score of 27. The second group fared no better having a total of 56, the same as group one. Trio three all scored 20 or more, Doombar having a very good round of 34pts, their total was 80pts putting them in good shape for the team prize. Group four had a total of 71 pts thanks to a 32 by The Dragon and 27 from The Swan. The Scribe had a very poor round with a paltry 12pts – prime score for a wooden spoon but it was close! Fifth away also had 71pts total but Smoothie, despite being a former Carmarthen member (years ago!) struggled to 19pts. Team six had a reasonable round with 75pts, The Director reaching 30pts. Finally the seventh trio took to the tee and also found the course unforgiving, Wiseguy having the highest score of 23pts.

With the exception of a broadly smiling Doombar, everyone found the greens devilish, being fast and taking unseen borrows. Others spoke fondly of being in blooming(!) heather. Nevertheless a good day was had by all and later catering staff provided an excellent meal.