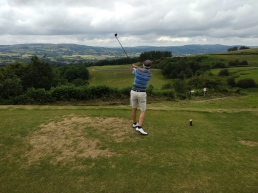 A Mountain to Climb

What a day! 24 members of Kilgetty Golf Society opted to travel the long way to Llandrindod Wells Golf Club and were richly rewarded with a wonderfully challenging and spectacular course with beautiful views from its summit. Well, that is, all but the unfortunate Don Newton Abbott who hit a tree stump on the way there and was a bit shaken up so returned home!

After bacon rolls and coffee, the assembled girded themselves for the vertiginous first and fortunately all made it to the top without a cardiac arrest! (Yours truly had played there before and opted for a buggy!). The roller coaster and mountainous terrain dealt up some unusual and spectacular holes, but most of our merry band rose to the occasion and came in with some equally spectacular scores. Indeed, such was the scoring that the handicaps of even those who got 36 points were subsequently raised by 1 shot!

Only five players of the 23 failed to make thirty points – Graham Basildon Bond (although he achieved his best ever Society score), Bob Dixie Forrest, Kelvin Curtains Boughey, Kevin Bacon Roll Gregory (who nevertheless was well satisfied with the only two of the day), and Dave Smiler Green (who was playing with a strapped wrist – don’t ask).

In the 30 to 36 points group were, in lowest to highest order – Barry Nippy Neale, Graham Victor Longster, John Magneto Richards, Ashley Willow Davies (who won the Longest Drive), Martin Dangler Davies, Roger Analyst Handcock, Mike Slippery Skidmore, and Wayne Chopsy Connett (who won the free raffle for the Llandrindod polo shirt and lowered the tone of the day by stripping off in front of bar staff). Also on 36 points were Simon Three Piece Sweet, Steve Gizmo Jones, and Neil Danglerspawn Davies (who won Nearest the Pin).

The top group with stunning scores were 7th Keith Mother Hubbard with 37 points, 6th Jack Zabaglione Zeraschi and 5th Wynne Andy Capp with 39 points each. Unfortunately, these guys won nothing individually because above them were, with 41 points, Alan Snuff Gawith in 4th (he won the 20+ handicap prize), 3rd Alan Sooth Sayers with 42 (off an 8 handicap!), and 2nd with 43 John Hamster Hammond (who surely must of thought he’d have won with that score if he hadn’t played in the same group as the winner).

And the winner with an astronomic 45 points, obviously enjoying the mountain air, was Rob The Builder Nixon, the only guy the Society’s Green jacket fits properly! Well done Rob. A three shot cut to your handicap. Oh dear!

The other prizes went to Curtains who won the Wooden Spoon but who was awarded some yellow balls as consolation, and to the best team of Mother, Hamster, and The Builder with a probable Society record group score of 125.