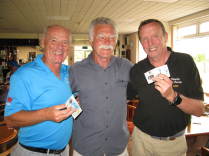 For the first time in Kilgetty Golf Society’s 15 year history we visited Maesteg Golf Club last week. 26 eager golfers arrived on time for great bacon rolls and coffee. However, 2 members decided to take the pretty route via Bridgend and arrived late by which time the rolls were soggy and cold!

What a great course and welcome awaited us. Without ado we split up to play off both 1st and 10th tees. Off the first were Meurig Careful Evans, Peter Pilau Rice, and Dave Smiler Green setting the lead with a mediocre 71 points, despite Careful’s attempts to hold the team together.  Second off were Allan Snuff Gawith, Simon Seedy Millett, and Graham Victor Longster all of whom mastered a course they had never seen before, amassing a great total of 105 points and believe me Maesteg is not an easy course! Snuff won Nearest the Pin and meticulously measured it at 32 feet! If only he’d known at the time that no one else had hit the green! Next were new member Simon Boney Jones, Steve Gizmo Jones, and Bob Dixie Forrest. Dixie played well until unfortunately losing his ball on the 18th, which blew his chances of a prize. Team score 83. Fourth to go were John Magneto Richards, one of only two who had played here before and hence much was expected of him, with Roger Analyst Handcock, and another new member Alan Sooth Sayers. Good scores but Magneto failed to spark that well, so they only managed 91 points. Lastly, buggying Martin Dangler Davies and John Javelin James were joined by long striding Ian Greenball Gregson. A great score by Dangler but unfortunately this was unsupported by the other two – 70 points.

Meanwhile once they’d found the 10th ,  John The Duke Drury, Wynne Andy Capp Richards, and Adrian Ambulance Alman set about the course with The Duke scoring well but unfortunately Adrian as befits his nickname ended up an Ambulance case! 70 points. Next off were Graham Basildon Bond, Keith The Box

Leverton, and Mike Slippery Skidmore. The Box was playing his last game for the Society before leaving for ‘Ull. We shall miss his company but unfortunately he did not depart with all flags flying. Slippery kept the team from sliding too far down the order - 76 points. Finally after much faffing about John Pashmina Perrott made the tee and his patient partners Joel Lofty Braithwaite and John Hamster Hammond set off to accumulate 79 points, although they’d have been better off if Pashmina had never made it! Lastly, the late Jack Zabaglione Zeraschi (No, he’s not quite dead), Perry Bonzo Phillips, Barry Nippy Neale and Wayne Chopsy Connett tried their best but ultimately failed to master this fascinating course. Chopsy was the other player who’d played Maesteg before but predictably could not remember it but Bonzo will, as, as well as having youth on his side, he won Longest Drive with a belter on the 18th. 84 points.

So, as the reader will surmise the overall winner came from the Team winners group of Snuff, Seedy and Victor. With a magnificent 38 points on a course strange to him, and winner for the first time at the Society was, aptly named, Graham Victor Longster. Well done victor Victor. All that practice at Gramacho, Sives etc. in Portugal over winter no doubt helped but let it not take away from a fantastic effort.

In second place with 35 points was Snuff on a better back 9 from Hamster in third. Dangler with 34 was best placed 20+ handicapper and Ambulance won the Wooden Stretcher (sorry Spoon).

All agreed the course was one we would very much like to return to. After a tasty meal and a few refreshing beverages Gizmo held the raffle and presented the prizes. Javelin won some Egg golf balls although when he collected his prize he did think they were his favourite duck eggs – hard boiled of course.