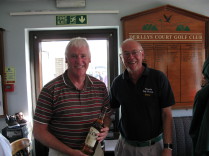 DWR EXCELS ON A GOOD DAY FOR ALL

The sunny weather smiled generously, the course was top notch and the catering as usual exceptional for the Society’s May outing, to Derllys Court Golf Club at Bancyfelin.

Stableford points between them, and the other four 90 or more. With ten more points

than anyone else, Wynne Andy Capp Richards and Bob Dixie Forrest helped the days

Dixie happily converting his nearest the pin for a two. Second individual overall,

Steve Gizmo Jones and Dave Smiler Green, embellishing his round with the longest

drive off the 8th tee and then managing to finish the hole pointless …. so much for

Woods, bagged the other two, whilst Graham Victor Longster, Rob The Builder Nixon

and Perry Bonzo Phillips performed modestly; better overall it must though be said

an exceptional five Stableford points on the tricky eleventh hole.

Worthy of repetition …. a great day at Derllys much enjoyed by all. Let’s hope we

get good weather again for our June meeting at The Gower Golf Club.