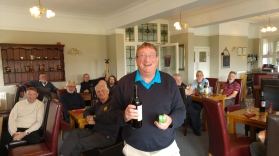 A Plethora of Fours

Eighteen members made the journey to Milford Haven Golf Club last Thursday and enjoyed a course in very good condition for the time of year. The fixture was kindly sponsored by Station Garage, Kilgetty – selling Hyundai cars and 4 x 4’s. and there were plenty of 4’s and fores on the day!

Interestingly, Milford has names for each of its holes, some of which I’ll mention below.

First off were a strong team of John Pierre Voysey, Perry Bonzo Phillips, and Bob Dixie Forrest. Belying their skills, they managed neither to hit the green on the Nearest Pin or the fairway on the Longest Drive! Dixie had the best score with 34 points but spoilt his card in the Orchard. You can’t cherry pick your holes Dixie!

Next were Steve Gizmo Jones, Peter Special Fried Rice, and John Dynamo Richards. Gizmo had trouble with his GPS as Milford have changed the order of their holes once again, but had little trouble actually playing the course, despite missing a 4 inch putt on The Road hole and finding deep water on Pimple! He did have a 2 on Doc’s though and 3 x 4 pointers. Dynamo and Special Fried had excellent first nines but fell away on the back. Dynamo like Dixie dived into the Orchard but came away fruitless.

Third off were Ian Greenball Gregson, Kelvin Curtains Boughey, and Keith Director Leverton. Curtains rescued his reputation with a decent score coming home, but Greenball blobbed too many holes to raise his hopes of a good score. The Director fortified his score with 4 points on The Fort to come in with 31 pts.

Roger Analyst Handcock, Wyn Dogsitter Hopkins, and Tom Tiger Woods followed, with The Analyst fleecing the others with 4 points on Sheeptrack to get to 36pts. Tiger recovered from a dreadful start eventually getting 4 pts on Westward Ho!

Lastly Dave Smiler Green, Colin ASBO Davies and Martin FCUK Davies teed off. FCUK played really well, only failing to score on Harolds Gap (the 1st).  ASBO’s score was amplified by 2’s on both The Valley and Doc’s.

After wining and dining Gizmo presented the prizes (most to himself!) as follows:

Thanks to our Sponsors, Station Garage, and to our hosts, Milford Haven GC for a thoroughly enjoyable day.