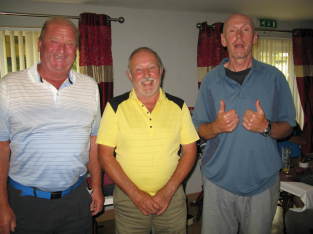 It's been a long time coming but last Wednesday 27 members of the Kilgetty Golf Society congregated at Glyn Abbey Golf club for the first fixture in 9 months. It was great to renew friendships with those we hadn't seen for ages, and to play in such a convivial spirit. In some ways the golf was a secondary consideration. Nevertheless, with four new members,  a competent display of golf needed to be demonstrated. The weather which was perfect for golf helped, along with a course in good condition although some of those who play at clubs with fast greens like Tenby and Trefloyne found Glyn Abbey's a touch too slow for them.
Nine groups of three went off the first tee after the obligatory bacon roll and coffee. First off were John Magneto Richards, Steve Banbury Cross, and Edward the Confessor Morris who amassed, if that's the right word, a team score of 68. Not Banbury's best effort but Magneto played well, and The Confessor confessed to having two birdies, one of which was a two and won him a prize.
Second were Bob Dixie Forrest, Steve Biddy Baxter, and Graham Bubba Watson who pushed the score up to 74 with Biddy equalling his best ever gross score in his first ever Society game, and Dixie had a two! After them came an excellent 92 by Wynne Andy Capp Richards, Darrell Smoothie Jones, and another new member, Peter Swiss Tony Tarry, all of whom were around the 30 point mark.
The next two groups failed to match the preceding team's score, with Barry Nippy Neale, Steve Gizmo Jones, and new member Tony Mouldy Moulding scoring 85 and let down by Gizmo's poor showing; and 89 from Peter Rocky Williams, John Hamster Hammond, and 4th new member, Derek Archie Campbell.
Next, John Merlot Viner, Graham Victor Longster, and Allan Snuff Gawith managed to take the lead with 97 points with Snuff excelling, playing at Rosemarket has obviously helped his game. Merlot also had a two. The 7th group of Roger Analyst Handcock, John Javelin James, and Jack Zabaglione Zeraschi didn't trouble the scorers with 77 points although some good golf was played.
Two groups left - Martin Dangler Davies, Tom Tiger Woods, and Kevin Dyer Straits were certainly in dire straits with 45 points albeit to be fair whilst Dangler has thrown a few clubs in the past few years, Tiger hadn't picked up one for two years. It was observed that on his way home in his sports car, he was not speeding! Last out but overtaking a couple of teams (literally) were Adrian Ambulance Alman, Rob The Builder Nixon, and Meurig Careful Evans. Well done to them. A fantastic total of 114, blitzing everyone else in the field.
After relaxing on the terrace and partaking of a good meal the prizes were presented as follows: Team prize - Ambulance, The Builder, and Careful. Two's - Dixie, The Confessor, and Merlot. Longest Drive - Ambulance. 28+ Handicap - Archie. Nearest The Pin - The Builder. Wooden Spoon - Tiger.
The ultimate prizes went to:- 3rd place Snuff Gawith 37 points, 2nd was Careful Evans 40 points , and the champion who donned the slightly creased Green Jacket - Ambulance Alman.