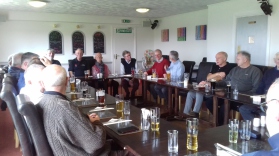 Delayed a week by Storm Gareth, Kilgetty Golf Society met at Haverfordwest Golf Club on Wednesday 20th. Fortunately this time there was no wind and the course was drier, just squishy in places.

As the 10am tee off time approached, three members had still not arrived so they were shunted to the end of the draw. All three eventually turned up having thought the tee off time was one hour later! Should have read their emails!

Setting the early pace were Alan Sooth Sayers, Peter Peroni Hughes and John Javelin James with Peroni excelling on his old stomping ground, and Sooth winning Nearest The Pin and Longest Drive! They totalled 92 points. Next off Graham Bubba Watson, Meurig Careful Evans, and Wynne Andy Capp Richards disappointed only amassing a score of 73 – Bubba is known to have his off days! Following behind with a better score of 94 came Rob The Builder Nixon who nicked into 3rd place , John Merlot Viner suffering slightly from his 3 shot cut after winning last month, and John Hamster Hammond. Fourth off were Kevin Bacon Roll Gregory Peck (we can’t make our minds up on his nickname), Roger Analyst Handcock, and Barry Nippy Neale. A poor 75 points – Nippy missed several short putts and Bacon didn’t roll. In the next group, making a welcome return to the Society after illness, John Silver Hair Hughes was joined in a buggy by Graham Basildon Bond, and the perambulating, Paul Goodbuy Marsden (don’t worry Paul, it’s not rude!). I shan’t say anything about their 58 as Silver Hair won the Wooden Spoon. The penultimate group of Steve Gizmo Jones, Bob Dixie Forrest, and Anthony Ferry Ryan hit an excellent 96 points thanks mainly to Dixie’s form now he’s playing regularly at Tenby GC. With 40 points he won the Green Jacket and just pipped Peroni to second place by a point. Dixie, Gizmo and Ferry unsurprisingly won the Team Prize. This meant that the last group of the late Jack Zabaglione Zeraschi, the late Kevin Dyer Straits, the late Graham Victor Longster, and the early John Magneto Richards had no chance with their 89 points, although Zabaglione won the 20+ Handicap prize, a far cry from his wooden spoon at Ashburnham.

All this was followed by an excellent meal from Haverfordwest’s GC’s new caterers, the raffle, the presentation of prizes, and news on our forthcoming trips to Clyne Golf Club and the extended Anglesey trip later this year.