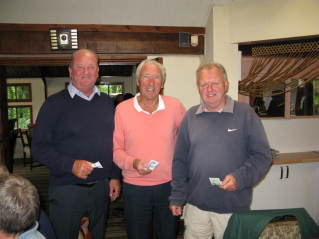 On Wednesday 12th June 2019, 13 intrepid “Band of Brothers” from Kilgetty Golf Society set off to do battle with Priskilly Forest Golf course.

In this case I would say that the course probably won, nevertheless we all had a great time. The weather, as on “D Day” offered us a “weather window”. The previous totally, inclement weather of that morning faded away as the first combatants stepped onto the tee. The course was in excellent condition and the greens were beautifully kept. The food was, as always, absolutely delicious.

The day was run and scrutinised by walking wounded, Martin Dangler Davies, ably assisted by Snuff - the other members of the committee, and a number of Kilgetty members being Absent With-Out Leave having decided to stage an invasion on the French/Brittany coastal golf resorts.

The winner and Green Jacket holder on the day was Hamster with a tremendous score of 37 points.

Second was Slippery with the same score but a poorer back nine.

Third was Snuff with a score of 36 points

Best placed over 20 handicap was won by Peroni with a score of 34 points.

The winner of the wooden spoon after a titanic battle with the course which earned him a Mentioned In Dispatches was Curtains (Please give me yellow balls as a prize instead of white ones).

The winning team was team was Peroni, Smoothy and The Builder with a combined score of 93 points.

The longest drive and nearest the pin were won by Sooth (who should not be let out of his cage except on occasions of good behaviour.)

There were two twos recorded by Peroni and Sooth.

All in all, a very enjoyable day was had by everyone thanks to the very warm and welcoming reception from Rebecca and her team at Priskilly.

Our next venue will be at Llandrindod Well Golf Club on Wednesday 10th July 2019. As at Point-Du Hoc on “D Day”, crampons and rocket-propelled, grappling hooks will be supplied free of charge. More information at www.kilgettygolf.co.uk.