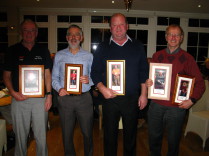 Last week Kilgetty Golf Society celebrated its 13th year by holding its Annual Awards Ceremony at Trefloyne Golf Club near Tenby. Aptly named as “The Race to Trefloyne” twenty three of the fifty six players who had competed in one or more events in 2016 were able to attend for the dinner and presentation.

The prizes were then presented by Steve Gizmo Jones. In first place with a superb average of 35.5 points (over the 6 best rounds) was Rob The Builder Nixon who had won two of the monthly fixtures at Priskilly Forest and Newport Links. Obviously he favours the north of the county. He was closely followed in second and third places with 34.2 points each by Bob Dixie Forrest who had won at Puckrup Hall, and by Roger Analyst Handcock who had been frequently placed during the year. Fourth with 33.8 was Barry Nippy Neale, and fifth Steve Gizmo Jones 33.7 who won at Glynhir.

Other awards were as follows:

Lastly receiving the un-coveted Wooden Spoon was John Pashmina Perrott who vows to improve his golf this year.

After outlining some of the excellent courses we hope to play in 2017, and receiving a report on the acounts from Pashmina, the meeting ended. Thanks goes to all the committee for their hard work during the year; to our enthusiastic membership for their support; and to our various sponsors. Also we thank Trefloyne Golf Club for providing a glorious setting, excellent food and delicious beer on the night.