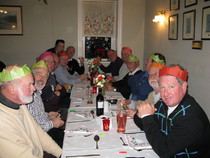 After a hearty Xmas meal Gizmo began the presentations in a gaudy reindeer jumper. Two new members had a warm welcome, Mike Maureen Allen and Martin Trucker Evans. There were also thanks for the Sponsors – a fantastic hamper was donated by Wisebuys Groceries of Narberth and Pembroke. Nash Farm Shop donated a fresh 6kgTurkey, and John Perrott donated a litre bottle of whisky. Gizmo also thanked the new committee members for their hard work over the past nine months, and in particular Chippy Wood for dealing with the handicapping, now the task of Wynne Richards.

The raffle was bigger than usual, Milford GC gave a free fourball, and there was brandy, whisky and wine, also the infamous golf voodoo kit, won by Chippy so don’t upset him. All the whisky was won by Dave Boy Green, the Boy became a Man!

The results of the day were:- In first place with 35 points was Mike Maureen Allen, who will henceforth be known as Milford Maureena; second with a better back 9 on 33 points was Stuart Del Boy Evans, and third Dave Boy Green. Team winners were Martin FCUK Davies, Trevor Santa Lewis, and Mike Maureen Allen. Nearest The Pin was Roger Analyst Handcock. Longest drive went to Simon Swan Davies. 20+ handicap winner was Keith Director Leverton. The Wooden Spoon, decided on the worst back nine, went to Shaun Chatterbox Taylor. There were four players with 2’s Maureen, Santa, Gizmo and Chatterbox. Well played all.

Gizmo made a poor start with two points from the first three holes before holing a birdie at the 4th. Scoring from then on was steady ending with 30 points. The Analyst also had a slow start but he settled down and was only two behind par at the turn, but eventually faded away giving him plenty to analyse. Holes one and two were no problem for Doombar, three points from each, but he also faded through lack of liquid sustenance!

Chippy fared a little better but could only manage three pars and finished on 31 points. The Director had a comfortable round and despite having four blobs also scored 31 points. Timber struggled on the first half, but too many blobs felled him – 23 points.

FCUK had a good front nine, no blobs but only scored 15 points. Hopes of a better back nine faded for two no scores, more obscenities and a total of 28 points. Maureen had a poor start, holes one and two seemed to give problems to quite a few players, however the back nine was a revelation, showing why he has a 7 handicap! (4 for the next meeting.) Santa was another to fail one and two, also the fifth but still scored 17 points; unfortunately, the back nine scored him an unseasonable 14 points.

The Chatterbox was way off form, after a moderate first nine, the wheels fell off and his final score a meagre 18 points, within sight of a spoon! The Book must have been closed for half the game as he struggled to 8 points before opening his account and scoring twice as many on the back nine. Wiseguy missed five chances to score but did get a three and four pointer to help his total to 22.

The Boy had a very good round only marred by a couple of blobs. Blinds had twice as many on the front nine as the back, putting him in danger of another spoon! Meanwhile newcomer The Trucker also failed to “pickup” on six holes and reached 21 points only.

Scoring on all bar one hole The Swan came in with 31 points. Another to falter on the first two holes was The Bandit. Not playing to his nickname, he blobbed four more holes and totalled 24 points. Del Boy found the course to his liking, scoring 16 on the first nine with three blobs! The 2nd half also went giving him 33 points. Victor played the front nine 1 over par but then disaster struck with nothing going right, 9 points on the run in!

Due to previous wins Smoothie was down to 8 handicap. He was not playing his best having had a heavy workload lately but still managed 27 points, not bad for an old chap! Pashmina also failed to register a score on holes one and two, followed by six more, ending with 19 points, although out of contention for the bit of wood.  Andycapp failed to score on just three holes but could only muster 22 points – too many bogies. Lastly Magneto was out of power having also had too many near misses also ending up with 22.

Better luck next time to all.