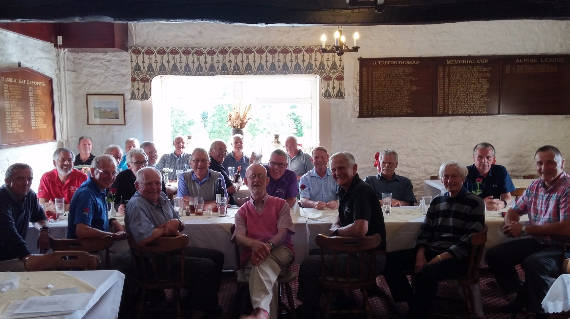 After having played Glynhir Golf Club on the warmest day for 10 years, a number of Trefloyne seniors joined other Kilgetty Society players at the scenic course near Ammanford, praying they would not melt this time. However the question actually posed last Wednesday was would it or would it not rain? We were fortunate and the heavens didn’t open up, and 25 golfers had a very enjoyable day aided by the generous sponsorship of Station Garage, Kilgetty, Hyundai Dealers.

Led off by Wayne Chopsy Connett, Paul Goodbuy Marsden, and Roger Doombar Woodward, the 8 groups proceeded to cut up the course. Well we can’t all be perfect. Chopsy et al managed to do better than most; in fact they won the team prize with a score of 101, with Goodbuy managing 3rd place with 36 points. Next, Bob Dixie Forrest, Keith Director Leverton, and Simon Seedy Millett couldn’t get anywhere near this, accumulating only 77 points between them. Even worse were Rob Builder Nixon, John Pashmina Perrott, and Allan Snuff Gawith with 69, although the Builder managed to claim Longest Drive whilst Pashmina adding to his collection of wooden spoons. Fourth off, Darrell Chalky Willington, Dave Smiler Green, and John Javelin James arrested the decline but not by much – 83 points, matched by the next group of Mike Slippery Skidmore, John Flutter Williams, and Wynne Andy Capp Richards. But then came Tom New Eyes Woods, Graham Victor Ludorem Longster, and Anthony Wise Guy Ryan who came within a point of Chopsy’s group, with New Eyes playing out of his sockets – 37 points and second place! Seventh off Steve Gizmo Jones, Kelvin Curtains Boughey, and John Dynamo Richards tried to overtake the leading group but didn’t quite get there despite Gizmo scoring 38 points to take the Green Jacket, benefiting as he did from a high handicap after years of failure! So only the 4 ball of Roger Analyst Handcock, Wyn Airport Hopkins, Barry Nippy Neale, and Ian Greenball Gregson were left. They were indeed left behind, miles behind in time and score. Their only claim to fame - Airport with the last shot to the 13th green winning Nearest the Pin while Chopsy, with the first shot to the green and the previous closest, watched on in dismay! Hard Luck, boyo.

After an excellent meal, Gizmo awarded himself first prize and reluctantly took the Green Jacket. Previously unmentioned awards went to the Director with the only two of the day, and to Doombar who won the 20+ handicapper prize despite being buggyless!